Lesson learnt: don’t go to Egypt a few days before a marathon. Ouch. While the first 15km of this race went by ok (though they were not necessarily super comfortable), I then went through 9 months of pregnancy in roughly as many kilometres until my gestation was full-term. I had no choice but to stop not once but twice, though I was thankfully a good boy and waited for the portaloos to rock up. Squatting for a poop in one of the two parks we went through might have been ok; doing so outside the Louvres, not so much.

So, yes, the end result wasn’t really what I was after but, in all honesty, the nice thing was that I didn’t really care too much:

I think the fact it was taking place in our backyard along routes we knew well was both a good thing (no pressure) but also a bad one (no excitement = no motivation to make this a big deal/target). And, more generally, my motivation levels for marathon training/competing were waning: the “return on time investment” is so small that it’s a big commitment and my life had pretty much become just work or running training which is just too limited.

So, with all these super handy excuses for under-performance in my pocket, it was time to leave the flat to go to the race, with a full 1h10 to go before the race started. 1 hour and 10 minutes. Erm. 70 minutes. 4,200 seconds. This, unsurprisingly, was a calculation oversight and a bit of a stupid decision. Cue some power walking to the metro and a bit of shoving and barging to get to the bag drop. And then some more shoving and real barging to get to the starting pen with a full 4 minutes to spare! Wahey! And… breathe. On the plus side, having so little time to stand around meant I didn’t really notice the cold: it was -2C ‘real feel’ when the race started which…was cold. It was a blessing mind you as it’d been around 25C the last few years during the race which, had it been the same in 2019, would really have been the nail in my coffin.

So, with all these handy excuses laid out, it was actually a real shame that I wasn’t in shape because a) the weather was absolutely perfect (cold, crisp, no wind) and b) the course was not quite Dutch in terms of being flat but wasn’t far off it with only one major pain-in-the-butt incline at 33-34km.

With all this said, we were off at 8.30am and already on a nice downhill slope along the Champs-Elysées! The course itself takes you around some nice bits of Paris, if you have the time to look up: Champs-Elysées, Place Vendome, Le Louvres, Notre-Dame (it was still intact then!) before continuing out eastwards towards the Bois de Vincennes park.

The crowds were patchy but ok at times and I was running reasonably comfortably at roughly 4min/km for the first hour, which is my normal target marathon pace (until things collapse…). When you reached the Bois de Vincennes, the crowd obviously disappeared but I certainly gained strength from knowing that the 15km marker would be the furthest geographical point from the finish line: from there onwards, I was running “home”.  None of the mental torture from courses which take you to within a few meters of the finish line before swooping you away for another 5km (like in Florence…)

Strava suggests that it was broadly uphill from 10km to 16km though I don’t really remember much of that at all which, considering how much I like to whinge, suggests it really wasn’t that bad. It was around then that the gassy foetus inside me started growing. Fast. And faster. Ugh. It was getting ever more uncomfortable but I kept going, and even sped up at the halfway mark when I saw super-supporter Becky, who’d come over from London to cheer Pippa on. She tried running along and accidentally made me pretty chuffed when she said “fuck you’re fast” as she struggled to keep up and chat.

By around 23km, I had a choice to make: give up on caring about my finishing time and take a break at the next portaloo (this is the sensible option) or hope it goes away and risk having to take a break in the street in front of the Louvres and a coach-load of tourists (the not-so-sensible option). I suppose a third option was to run with diarrhoea pouring down my legs. I went for Option 1. 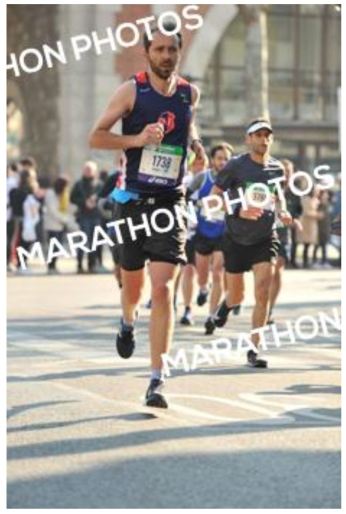 By now, any lingering motivation had gone, so I just decided to try to avoid walking at any points, and that that’d be a success: the target was therefore to get to the Eiffel Tower at 30km, then the Bois de Boulogne at 35km, then “only one parkrun left” at 37km, then “5 laps to go” at 40km and then the end.

There were only two not-so-pleasant moments: a 500m tunnel along the Seine (stuffy) and a 1km climb after 33km (nasty) and one really-not-nice moment, when I had to run past a young guy getting CPR after 41km.

It certainly puts things into perspective and makes you realise that, even if you aren’t having a great day, it’s really not that big a deal.

I crossed the line in 3h09 with a general feeling of “meh”: my interest and motivations for marathons just isn’t quite there anymore and I think I’ll focus on shorter distances for the next couple of years. I want to get some time back at weekends and I just don’t have the time combined with work if I want to do anything else.

Marathons are also too hit and miss: when I’m in shape and the weather conditions are good, I’m pretty consistent in 2h50, 2h52, 2h53, 2h53 and 2h54. However, on 5 other instances, I’ve been ill, the weather’s been stinking hot or I got an injury which essentially ends up wasting 3 months of training.

Anyway, while that sounds a bit miserable, I’m actually quite looking forward to a change so this is a positive change!

One person who hasn’t been mentioned so far due to her lack of cheerleading is Pippa, who was also racing! She trained brilliantly for a few months, knocking off higher miles, and faster miles. It was also going brilliantly on the day until 25km when she got hit by the curse of Brighton and got leg cramps again. It made no sense as she’d run further and faster in training but, somehow, it all went wrong. She stopped, she walked, she jogged, a man on a bike stopped and gave her a leg massage (!), she got going again and walked/jogged the rest with Becky. Through grit and determination, she battled through some pretty miserable moments and, while she was hugely disappointed, was pretty impressive: running through adversity is much harder and more worthy than when ithe race feels like a piece of piss.

So voila, time to hang up the marathon boots for a little while I feel and focus on short stuff.

Did I say I was going to run 250km from Bratislava to Budapest in 2 weeks’ time? Oops.