Work being utterly (utterly) nuts in late 2018 and early 2019, we didn’t really get round to planning many running trips: a) because of my constant inner guilt regarding my carbon footprint and b) because of sheer exhaustion. As such, we ended up relatively unusually with 3 races kicking off less than 10km from our front door in the space of a month: the Paris Half Marathon, the Paris 30km Ecotrail and the Paris Marathon. I had already ticked Paris off a while back, so these races don’t warrant a new “number” in the 80 malarkey. 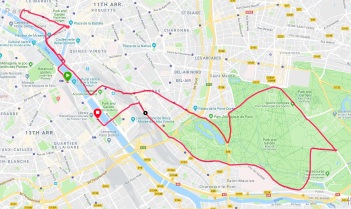 First up was the Paris Half Marathon. My Spring marathons tend to disappoint so this was no exception to the rule: it didn’t really go too well! They’d changed the course this year so it now avoided going downhill for the first half and up for the second half. Instead, it almost flipped it around with marginal uphill/flat for the first half and flat/downhill-ish for the second half, by which point my legs were burnt out anyway.

My legs were also seemingly burnt out (I assume) because of the high recent mileage: ~100km/week and ~60km per weekend. I always struggle with higher mileage and this year seems to be no exception. Add to that the 15-18 hour work days of the previous few weeks and I was zonked: for context, I fell asleep in the tube on the way home, that’s how much my body was craving not running!

Race day conditions were ‘passable’: cool-ish, though warm in the sun, though very windy with gusts up to 65kph in our face for the last few kilometres, which is far from ideal!

The start was well organised too: clearly marked bag drops (with plastic bags to keep the bags dry, nice touch), alright-ish number of toilets and not too overcrowded pens. Everyone got a full pat down and bag check on entry which is new to be, but a reflection of the times I guess.

My first few kilometres were ok-ish, though the ‘heaviness’ of my legs made it clear this would not be a good day in the office. My clubmate Aurélio was lovely and suggested pacing me around as part of a long training run for him: I’d previously said I’d be going for 3’45”-3’50”/km. He’ll have been disappointed when he joined me along Rue de Rivoli and I said I’d be lucky to average 4’/km that day! For context, he recently got up at 5am to run 25km at 3’20” pace. Yuck. And wow. 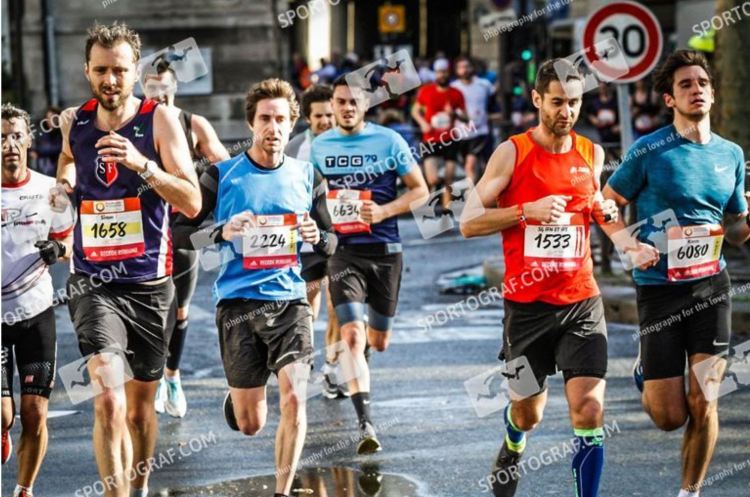 Anyway, after we went past Place de la Bastille (I didn’t trip anyone up this year, see my last post…), we circled around and started heading up to the Bois de Vincennes. As we rose upwards, my speed went downwards though, looking back at my splits, I was surprised to see that I actually kept on target until about 12km. It did not feel like that! The rest was calamitous and, despite the downhill coming back from the Bois de Vincennes, I was barely getting under 4’15”. Without the wind in our face, I would clearly have been on PB pace. Ahem. Aurélio kept me going, encouraging me when all I really wanted to do was quit.

In the end, I just squeezed in under 86 minutes which (relatively speaking) is seriously slow. More worrying was the fact that my legs felt like I ran the whole thing in 70 minutes. I blamed exhaustion and moved on. Then I fell asleep in the tube.