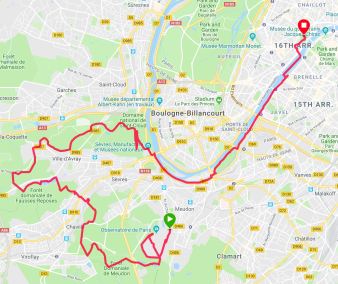 What better way to get over exhaustion than run a 30km trail race 6 days later, having had another horrific week at work? Surely I’d be fresh as a daisy by then.

I can’t really remember why I signed up to this race: we had friends who said they were doing it, and I think I saw it as a good training run. Well, it certainly tested my mental strength.

The race starts up in Meudon, on the hills outside Paris. In line with its name, everything is “eco” so you have to carry your own drinks, bring your own mug if you want to refill during the race, take a bag with you for waste etc and use the “eco toilets” at the start: the type where you take a bucket of sawdust with you. Now, I get why it’s better for the environment. But it’s certainly not better for your bowel movements when you enter the carboard/PVC portaloos and there’s a pile of sawdusty poop staring up at you about 3cm from the rim where you’d be sitting. No thank you. Straight to the back of a different queue for another portaloo.

I squiggled my way to the front of the pens and got ready for the long slog. I’d opted for normal trainers for the day because it hadn’t rained much so I didn’t want to risk running a long way with unusual shoes: this proved a mild mistake within about 500m as we went through the first mud bath of the day…

I was never planning on taking this race too seriously and it was obvious within a few minutes that my legs weren’t either: the left one felt like lead, the right one like an elastic band. Bleh.

Once we’d cleared the first of a few tree trunks we had to jump over, I decided to forget about my plans to “listen to nature” (which quite frankly just sounds more like someone (me) huffing and puffing and mud sloshing around than birds peacefully tweeting away) and got my headphones out. If ever you fancy a coordination challenge, try untangling a spaghetti of wires while running at 15kmph on mud and around trees. Not easy, but I succeeded, and I could zone out to crappy pop for the rest of the race. This was probably my only successful achievement that day.

The first 20km was pretty typical trail running: a mixture of muddy inclines dry flats and ankle-snapping descents. Talking of which, there actually was one guy rolling around à la Neymar after about 8 kilometres and screaming his guts out while people were calling emergency services so it was a very useful reminder of the dangers of sprinting down a rocky hill (no shit, right).

After our little chevauchée through the Foret de Meudon, we reached Ville d’Avray for a few more quad-busting climbs. At this point, we caught up the back runners of the 18km race (there was also a 45km and, gulp, an 80km race)

By this point, I was happily settled into a routine of walking up the climbs and running the rest: as such, I was rapidly dropping down the field but I didn’t care at all: so long as I didn’t walk on the flats, it was ok.

Once out of the Domaine de St Cloud, the last 10 kilometres were up and along the Seine’s quayside. It was pretty unexciting overall but there aren’t really that many alternatives to get you into central Paris. I had aimed to run these last 10km at marathon pace (4 min/km). I think I once got under 5 min/km… Legs. Dead.

Just as you get towards the Trocadero, they took us up a sharp turn which took us up one final bitch of a staircase (though there were outdoor escalators which Pippa said she saw some cheeky runners using) before the last few hundred meters to the finish.

On the way, I was about 3 centimetres (literally) from being floored by a motorbike driver who ignored the volunteers who had stopped the traffic for runners. There was nothing to gain from going ballistic (plus, there were seconds to lose. I know. In a meaningless race too) but that was far far too close for comfort.

And then, the Trocadero with the Eiffel Tower in the background. This was definitely Type 2 fun. Time to rest.