My next pit stop, 3 days after New York (it never stops), took me to Stockholm for a work conference. I was invited as a keynote speaker but (thankfully) couldn’t make it in time so it was to be a flying visit to talk about my organization and the global landscape for our work.  The first day was fully used up but I had a little bit of time on the second morning before leaving to go for a stroll.

Unlike New York, this was a brilliant little adventure and exactly what ‘running-exploring’ should be about! It’s also an example of how timings/little decisions can make or break an adventure, but more on that as I go along.

My first good call was made from my unusually comfortable hotel bed. The night before, 7am seemed like a good time to get up and about. When I woke up, there wasn’t a flying chance I wouldn’t snore away for at least another hour. Which I did. Which set up the start of a few lucky random events.

We’d been to Stockholm once before so I didn’t need to do too much research in terms of knowing roughly where the ‘sights’ are. Also, as I’d seen them before, I didn’t have quite the same urge to see every famous/ cultural/ historical/ beautiful/ horrific/ ancient etc site in town.

I remembered Djugarden, to the east of the city, being lovely and forested so my general plan was to head that way and see how much I could get done before a) breakfast and b) work.

The (relatively) early morning meant the streets were quiet (by London standards) as I headed along the Strandvágen port eastwards. After the heat and humidity of Washington and New York, my legs felt reborn in the cooler drier Swedish weather.

For anyone who’s been to Stockholm, you’ll know that you soon go past the Nordic Museum and the Vasa museum, which has the “only almost fully intact 17th century warship ever salvaged” (the ‘Vasa’…) which is actually worth a detour if you’re nearby.

The next museum, which was adjacent to a large (slightly crumbling) funfair was slightly less historical (the Abba Museum…) though I did stop to try and take a photo as Bjorn (or Benny?). I failed.

So far, so ‘alright’. A couple of kilometres later and I was thinking that maybe this wouldn’t be a particularly exciting run around town after all. I was just approaching a roundabout which seemed like the right place to turn around but I thought I’d poke my head around the corner to see what was next, just in case. There was a pretty harbour, so I carried on to the next corner. From there, I could see the Djugarden forest, which had already started going a range of autumnal orange and reds and it would have been sacrilegious not to go explore it. So I carried on again and headed into the trails of Djugarden forest which was, as the kids say, a ‘total blast’. Little decisions, happy consequences! 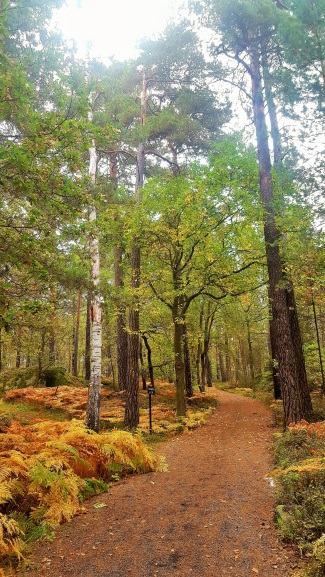 The totally unmarked trails were taking me a little bit all over the place and I did think a few times that, with no ID, water or money, this was marginally silly but I still had the GPS on my phone in case it got really bad. In truth, I was never probably more than a couple of kilometres one way or another from a main road so the likelihood of someone discovering my mummified body in 50 years’ time was pretty remote.

It’s hard to really describe why running through forests is so relaxing. Maybe it’s the wall of trees which blocks you off from reality and civilization. Maybe it’s the smells and sounds. Maybe it’s just the rarity of the event for ‘urban runners’. Either way, 20 relaxing minutes flew by and I soon reached the edge of the forest and the start of the Baltic Sea (I’ve never been able to quite work out if the water around Stockholm counts as a river, bay, lake, sea…).

This spot felt familiar and I soon remembered why: it was hardly a monumental event but, 6 years earlier, I remembered Pippa and me childishly laughing (and taking pictures…) of an overly amorous couple on the grass who couldn’t wait to find a hotel room. A little chuckle later and it was time to turn around  to avoid missing the breakfast slot.

It’s probably fair to say that, being totally stereotypical, Swedish people are good looking and a lot of people lived up to that stereotype. I genuinely almost tripped over mind you when I ran past another stereotype: a class of 20 kids and teachers dressed head to toe as if they’d just lept out of the Sound of Music musical, carrying wicker baskets full of apples and holding hands. Maybe it’s a thing. Maybe I just stumbled on the equivalent of a class getting ready for a Ceilidh in Scotland? Odd.

When I got back to Strandvágen, I made my last ‘good call’ which turned out to be a very funny one. Instead of heading back to the hotel, I thought that I really should make the kilometre detour to go past the royal palace on one of the nearby islands (for those who haven’t been to Stockholm: the area is essentially a huge maze of many islands). This, by itself, was reasonably interesting but, on the way back, my run got halted by … royals going past in velvet-covered horses and gold-leafed carts, straight out of a period drama. I’m told this is uncommon, though I was also told by a Swede that she didn’t recognize any of the people in the carts so who knows, maybe this was the equivalent of Arthur Chatto or Prince Richard (who are they? Philistine! They’re 23rd and 24th in line for the British throne. Of course, I didn’t have to Google that…).

And, with that, my adventure was done. All that was left for me to do was have a shower, eat four plates for breakfast and feel sick for the rest of the day.

One thought on “Squeezing Stockholm In Between Meetings, Stockholm, Sweden, 27 September 2017”