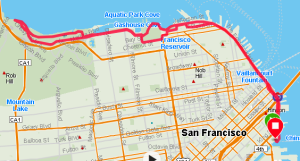 Pelicans. It’s not often that I think that pelicans are mesmerising, let alone graceful. Quite frankly, I think they’re mostly butt ugly. But, at this time of sheer oxygen-deprived exhaustion, there was something remarkably beautiful about this flock of shaggy beasts cruising past the Golden Gate under the rising sun. The individual creature’s ugliness turning into hypnotic elegance as a cluster. Though, by now, we were becoming more and more spread out – more of a long line of runners than a cluster. Oh, pelicans, right. Well, they were still bopping alongside us too, though probably less sweaty.

San Francisco, 6.30am, at the Giants stadium and I was barely dressed, with the usual vest & shorts combo which seemed highly inappropriate for an autumnal dawn. Why was I here? Well, I’d just moved to Paris a week earlier. And, logically, a sensible thing to do would be to abandon Frenchless Pippa in France for a week and jump on an 11-hour (ugh) flight for a work conference. And, much more logically, the first thing I did when I heard about the trip was to rush online and check out Californian race calendars. 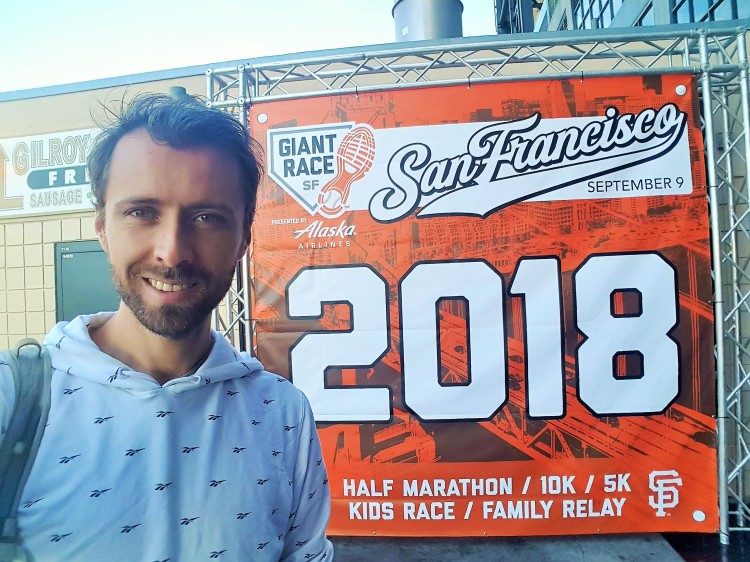 Lo and behold, by some quite considerable fluke, the annual San Francisco Giants (baseball team, it’s like cricket but even duller) Half Marathon was taking place while I was there, and the start line was only 2km from my hotel. Bingo. Five minutes later and over $100 poorer, I had entered.

The next month flew by as we packed our lives into boxes for our big move (and I bizarrely had a great month of racing), and California rapidly crept up on me. Race day came, my alarm went off at 5am and I sprung out of my bed, fresh as a daisy. Jetlag: thank you.

Filled up on a mix of Cliff bars and more Cliff bars (the hotel snack dispenser wasn’t particularly enticing), I headed down for my standard pre-race routine: jog to the starting area, queue for the portaloos, give up and dash for the bushes, have a tokenesque jog around to barely warm up your legs, then lose those limited gains by becoming a sardine in the pen for 20 minutes.

At 6.55am, as is traditional in the US, a young lady sang a (rousing, to be fair) version of their Star Spangled Banner national anthem about 45cm from my head. A few minutes later, tinnitus in tow, we were off.

The course was relatively straight forward: start, run approximately 10km along the San Francisco Bay towards the Golden Gate, turn around, finish. There were a few more intricacies but, in short, that was it.

There were about 3,000 people doing the half marathon and about as many doing the 10km race so I was surprised to find myself right from the gun in the front (ish) pack: the top runners obviously pulled away in due course but I don’t think I was ever below 20th. Maybe I deserved my ‘elite’ wrist band after all (I think they use the term ‘elite’ differently to the way I do…).

It was odd having so little pressure for a race – after 3 years of poor half marathons results, my expectations were low. A few people knew I was running but no one was there on the day to work my nerves up with beforehand. In actual fact, amusingly, the first sounds (grunting aside) I made that entire day were to a fellow runner 5km in with whom I was keeping pace “are you going for 1:19?”, “Yes”, “OK, let’s stick together”.

By that point, we had skimmed the outside of downtown San Francisco, skirted the financial district and flown past Pier 39 – where hundreds of seals sunbathe the day away – and Alcatraz – where hundreds of prisoners probably didn’t do much more with their days. We had also run past dozens – though quite frankly probably hundreds if I looked carefully – of homeless people. I have never been as shocked by homelessness as I have in San Francisco: its scale is overwhelming. Perhaps shamefully, you often barely register the odd homeless person in major cities: here however, especially in downtown, shockingly unwell – both physically and mentally – people by the hundreds (thousands?) sleep outside. From people (literally) pooing themselves in public to people with open wounds the size of my hand, it was staggering. Maybe this can happen in a poorer country after a natural disaster but, in the richest country in the world, it’s simply staggering that there’s so little nationwide support / social security for those who fall off the gravy train. Anyway, rant over.

Back to the race: buoyed by my previous month of good performances, I had set off in 1:19.59 pace, a.k.a around 3.45min/km, to try to break the 80 minute barrier I had only once broken, in March 2016. The first 10km weren’t the hardest at that pace, it’s the last 11 I was thinking about! So, when I started chatting to this person – name unknown, I was reasonably comfortable. As we were running along the coast, I knew the race would stay pancake fla…oh bugger, San Francisco indeed has a few monstrous hills too, as per its cable carts and Lombard Street fame.

The climb wasn’t long, but it was enough to break my stride and pace significantly. I really really need to train more on hills. For that kilometre, it was enough to drop my pace to 4.05/km – nothing dramatic but, when you’re chasing every second, it counts. Thankfully, what goes up comes down and the next kilometre was downhill, and I clawed back a dozen or so of those seconds.

This unknown runner kept pulling away a little bit but, quite unusually for me, I found the mental strength to push a little harder and catch him up. By now, we’d been joined by a third – also unnamed – runner and we were working with each other. In an act of selflessness rarely witnessed, I even pushed hard enough to lead for a few kilometres. Please address your support letters for my Knighthood directly to the Queen.

After 10km, as planned, we reached the Golden Gate: in the low-lying warmth of the rising sun, it was undeniably very pretty. But, being totally honest, it’s kinda alright, but I found the Oakland Bay Bridge, at the other end of San Francisco and near where the race starts/finished much more impressive.

We spun around at a U-turn (another second lost, aaah!) and now faced directly eastwards into the sun and, slightly annoyingly, the wind. It was at this point that I really started noticing the gliding pelicans which were, genuinely, quite a nice scene (nicer than us runners, for sure)! 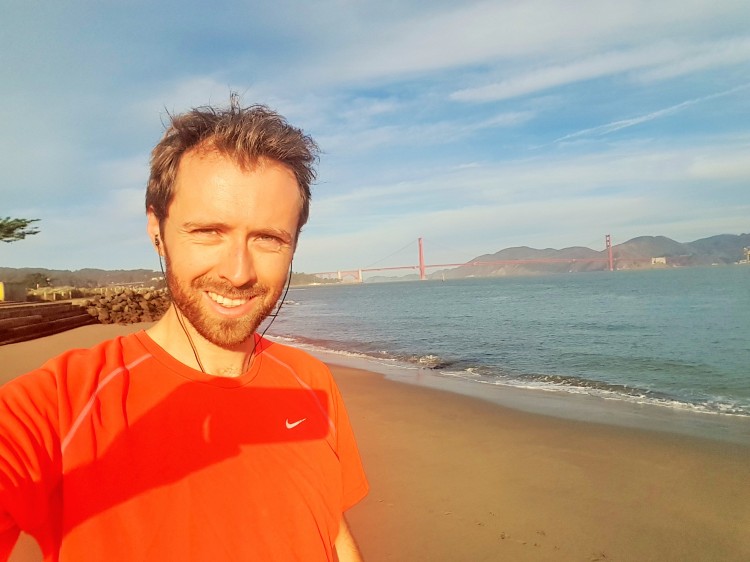 The next few kilometres got a little harder: not only was the lactic acid starting to build up, but the two kilometres through Crissy Field Park were on gravelly paths. By itself, that isn’t too big an issue but racing flats are particularly thin and sharp gravel is particularly painful at pace!

Anyway, I survived and the three of us were still keeping pace until we reached the second – and last – climb of the day next to the marina. Again, it was relatively short and sweet – only about 200m long – but bloody hell it was steep and it was enough for the other two runners to take off while I ploughed along. The descent from this peak, however, was amazing. I peaked at 2.50min/km. Depressingly, that’s probably barely enough to beat the world record. And I was basically running vertically downwards.

The final 5km were a bit of a struggle. On one hand, my brain was going “crap, I’m actually on target for a PB”. On the other hand, my brain was going “is that a stitch? I’ve never had a stitch in a race, what do I do now?!” Grit your teeth was the answer, but it wasn’t very pleasant and my pace noticeably dropped by a few seconds/km. This also wasn’t helped by the fact that, by now, we’d caught up all the slow 10km runners who were doing a shorter loop – the race was otherwise very well organised but this is a rookie error, and I was having to zig zag from side to side. Granted, the road was 4 lanes wide but, erm, let’s just say that a large number of runners running 10km in around 1h20 are on the larger end of the spectrum, even by American standards.

While I knew exactly how far I had to go as my watch told me so, the last few kilometres seemed interminable: the Oakland Bay Bridge, which I thought was a landmark for the finish line, was actually still a good kilometre and a half away from the finish line, and a straight road is, well, pretty mind numbing after a while.

That said, the prospect of a PB kept me pushing hard – harder, in fact, than I think I’ve ever pushed myself physically or mentally over this distance. The stadium was now in sight. Weirdly, this was the least well sign-posted part of the race and I lost at least a second (A SECOND!) looking for the entrance gate.

Panic over, I was in and, after one last dash, I could look at my watch with glee: 1:19.23, almost 30 seconds off my PB. Boom! I had finished 19th – soon to be upgraded to 18th after they realised a 59 year old woman had, indeed, not set a new world record (10km runner with wrong bib, I guess) and finally broken this meaningless, yet so meaningful, barrier again.

There was no-one to celebrate with, but I was fine with that. Sometimes, it’s nice to work hard, achieve something and reflect on it quietly. No selfies, no grins, no hugs, just a silent inner satisfaction over hours of hard work finally paying off. Oh, and the less said about the goodiebag, the better…

[Obviously, by the time I finally got round to writing this up, I had already got another PB by a whole minute in Lyon but that’s for another day…]