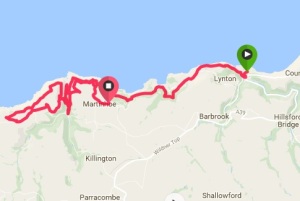 A town crier took to the stage in the picturesque coastal village of Lynmouth, tucked away from civilisation in a deep bay in Exmoor. Bell in hand, white tights perfectly matching his fluffy collar, he cleared his throat and got ready to do what he’s probably done many times and announce the start of a village fete. Except, this time, there was a small twist: drones were buzzing overhead, 500 runners in club vests – many sporting quite amazingly dense facial hair, were twitching on a start line and a distinct sense of apprehension was floating through the air. This was, after all, the Red Bull Steeplechase, a somewhat masochistic twist on fell running which is pretty questionably senseless in itself.

Set for the first time away from the Peak District, the 37km race’s main twist is that there’s no certainty that you’ll actually make the finish. This wouldn’t be (although it COULD be…) because you’re 200m down a ravine but might be because roughly one quarter of the race is knocked out every quarter, at each ‘steeple’. After 14km, only 220 of the 350 men are allowed through; after 23km, only 100; after 30km, only the top 20 make it through to the end. With just shy of 2,000m of climb, whether making it to the end is a good thing or not probably depends on how much you enjoy having serrated knives dug deep into your muscles.

Thankfully (for me), the likelihood of being in the top 20 was pretty low. As we stood around at the start line, Sean, a much faster club mate, started picking out half a dozen 2h20 marathon runners who were lining up at the front. On top of them, there was a bunch of professional ultra-marathon runners and obstacle runners. And probably another dozen mountain goats/fell runners. Mmm. I took a few steps back away from the front line…

And, then, under glorious sunshine and with the ring of the bell, we were off. And bloody hell we really were off! I clocked the first kilometre in 3.45 – not far off my 10km race pace. Clearly, everyone else had got the same tactics as me: make the most of the flat start around the village and get as near the front as possible to avoid getting stuck in a queue on the hills. I must have been 40th or so at this stage, well aware that this wouldn’t last. As soon as that kilometre was over, we hit the first climb: a 30 degree climb out of Lynmouth up zigzagging paths. Thanks to my spurt, I would be the annoying one slowing people down rather than the annoyed one.

As we escaped the climb, we headed across a rocky patch to the high-paced sound of a lone piper at the top of a cliff playing William Tell’s Overture on his clarinet. If we weren’t already busting our guts out by then, this was sure to make us put the turbo on. Drones flew by, sheep stared in confusion, branches cracked under foot as hundreds of thin smelly runners raced through what was mostly trail tracks for the first few kilometres. So far, the biggest risk was tripping and breaking a tooth. So far, so good.

Soon, we reached the cliffs, where there was a slightly higher imminent risk of death or broken limbs. My main aim, other than trying my hardest, was to reach the end in one piece. The race’s motto is ‘Nil Gutsus, Nil Glorium’. ‘Nil Sensibilis, Nil Frankfurt Marathone’ rung more of a chord with me: if I’m sensible, I will be able to race Frankfurt Marathon at the end of the month. If I’m stupid, maybe not.  A number of runners unsurprisingly bore the tell-tale scars of this approach later in the race: cut knees, bloodied hands… I noticed one who ended the race in a sling. I didn’t hear any mountain rescue helicopters which I guess was good!

We continued slaloming through the roots, loose rocks and cliff edges – sometimes needing an urgent counter-balance to avoid a tumble down the slope, and hurdled over a few streams. By the first interval (mid-way to the first cut-off point), I was 62nd, a decent position which meant I didn’t need to worry too much about the first steeple. Surprisingly enough, I was holding my place in the hills but was mostly losing ground going downhill – clearly, I valued my body more than others. The breath-taking views were matched by the breath-taking paces on the descents of some of the runners. It paid off for some – one kept sprinting down the hills (and overtaking me) and walking up the next hill (with me overtaking him). It quickly became a joke, with each other saying “see you on the next hill” every time this happened. He finished a good 30 places above me so good for him!

And then. And then… What. The. HELL. Is. That? We’d got to the bottom of a river mouth and, having gone down 200m, I knew from looking at the map before the race that this would be bad. However, I hadn’t banked on the 35 degree climb for the next 500m to be over burnt out bracken. Everyone was reduced to a slow slog. No one was talking. All you could hear was the heavy pant of other runners. Once you crested the hill and after a second to appreciate being able to feel your legs again, you were off. No rest for the wicked, this first stage was brutal. At this point, I really do start questioning some life choices.

The next few kilometres were slightly easier with a mix of trail paths and undulating tarmacked roads. I reached the first steeple in 90th, quite relieved but also aware that I was losing places so the next stage might be a bit of a bum fight for qualifying. This was made even worse when I stopped for a glass of water and was immediately overtaken by 6 runners. The likelihood of qualifying for the third stage was quickly slipping away.

The second stage was easier – not necessarily any less treacherous (what it would have been like had it rained, I hate to think) along sheep paths along high ridges, but certainly less steep. A few pushy runners barged by followed by a few slightly more respectful ones, and I was fairly confident by that point that I was nearer 110th and with nothing much to run for other than the bus back to the village.

To my surprise, I was only 102nd at the interim point – maybe there was a chance. The next three kilometres were uphill; nothing too steep after what we’d experienced but still undeniably relentless. I overtook a few runners and got overtaken by what I thought was another half a dozen. We yo-yoed back and forward. Eventually, as we approached the cut-off point, I sped up a bit to burn off what limited energy I had left before my eventual disqualification. To my frustration (although, let’s be honest, also sheer relief), I was still 102nd, only two places and about 30 seconds off qualifying. Damn it! (and haaalleeluujjaaahhh)

In the free bus back to Lynmouth, what was most noticeable other than the stench of 25 male runners was the camaraderie and general good mood. No one seemed to care they hadn’t made it to the end. Maybe it was the sheer relief of being alive. Or maybe the sheer relief of being able to sit down. Most of us knew we would never have made the final cut anyway. This was our first chance to tell our side of the tale to others before meeting up with friends in town (and boring them to death) and we were damned if we weren’t all going to have verbal diarrhoea with each other to whinge about the course’s 1,200m of climbing we had just suffered through. 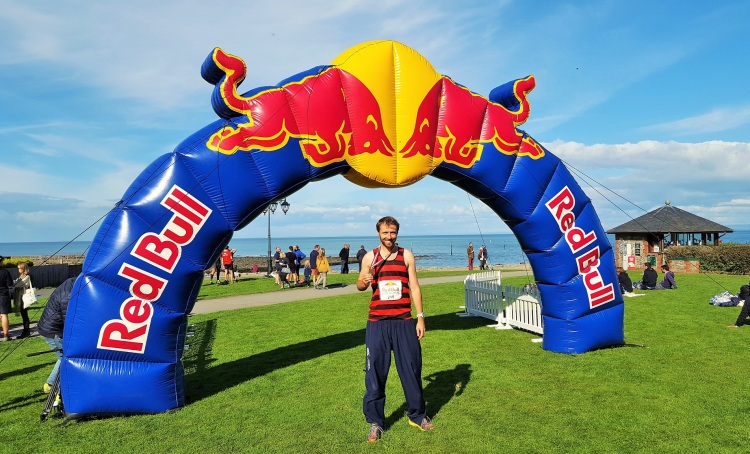 We got back to the village just as Ricky Lightfoot (which, apparently, is his true name!) crossed the line in 2h41, an absolutely ridiculous time. Here, the party atmosphere was in full swing. While I may question the nutritional value of Red Bull’s drinks, they sure as hell can organise a seamless and brilliant event: easy sign-up process, live music, excellent free food, great hoodie, fun if painful course, lots of well-informed marshals, nice medal…they even had MORE toilets than needed! And all that for barely more than £30.

To finish on an inspirational note, I asked Sean, who had steamed to an impressive 29th place, what his pearls of wisdom were on our train home: “Dunno, I was in the zone. Just the scenery, dunno.” So there you have it. Chew on that. 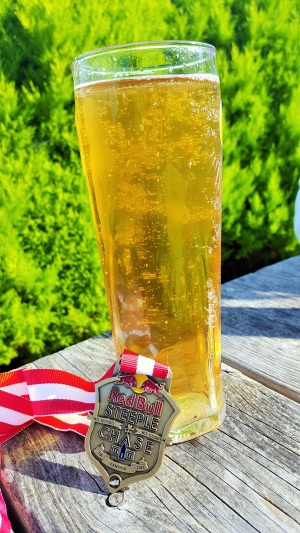