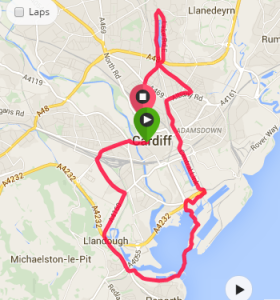 Although the weather for the race wasn’t anywhere near as apocalyptic as the forecast suggested it might be, it was hard not to feel a little sorry for the organisers of what was, otherwise, a brilliant World Championship.

These take place every 2 years – last time in Copenhagen, next time in Valencia. The rules for organising it are pretty clear. Crystal clear actually according to the IAAF website:  organisers shall essentially pay for everything imaginable, from accommodation for all athletes in 4* hotels to providing offices for the IAAF to painting blue lines to show the fastest route…the more interesting part is that they have to organise a mass event along with it so, for the lucky few thousand like me who paid through their teeth (something like £60 – damn free 4* hotels for elites!) for a place, we got to mingle with the elite.

Long distance running must be one of the very few sports where you get to take part in these events right behind the absolute best at their sport in the world. Arguably, the early rounds of the FA Cup or equivalent might be the same but this is like the final. Admittedly too, if I hadn’t put down I was going to run in sub 1h15 (of course), I would have been more than two rows back from the elite!

The course followed fairly standard pattern: broadly a flat-ish circle around Cardiff which took in the main sights. It started next to Cardiff Castle – whose Roman walls might not have provided much defence against waves of hordes of invaders over a couple of millennia but were bloody handy to stretch my calves against before the race, before heading south westwards past the Millenium Stadium, across the barrage around Cardiff Bay, northwards past the Millennium Centre, through the town centre to Roath Park Lake and back to the finish line next to the town hall and near the castle.

Despite the weather, the crowd was pretty large at the start – they were clearly mostly there for Mo, then the elite and then maybe the mass race but they provided a nice, loud, atmosphere for the 12,000 of us runners who were hiding under the free ponchos the organisers had wisely given out.

Mo gave us a smile, some giant flames burst out all around us and off we set.

The race kicked off at an utterly ridiculous pace, although there was a bit of drama as the title favourite Kamworor (and eventual winner in 59.10 – he’s that good) tripped over on the start line. Oops! It took him a good 5-10 seconds to get up and probably another couple of minutes to get back to the front so I reckon it’s fair to say that I was beating the world champion for the first few hundred metres of the race!

The starting speed was utterly unsustainable. I’ve never experienced that many people running THAT fast. Although I was acutely trying to slow myself down and was deliberately ignoring the stream of runners – including one dressed a superman, overtaking me, I still ran the first kilometre on pace to finish in 1h13! Ha.

As the race progressed, the weather gradually deteriorated and the gales picked up. With the first 6km being broadly due south (so straight into the wind), I knew my only chance to get under 80 minutes for the first time would be to go out hard against the wind and not lose too much time. I’d planned my race down to a theoretical T: 3.42min/km for the first 10km, between 3.45-48min/km for the next 10km and a sprint to the finish line. This should give me enough margin for a few poor, hilly, windy, or hurricane-like kilometres in between.

The crowd was patchy as we whizzed through the suburbs – this was unsurprising considering the weather and quite a few thousand still made it out. Running in the rain is a strange pastime. Watching people run in the rain seems even stranger..!

One of the biggest crowds was just before the 5km mark, which also coincided with the hardest climb of the day – an absolute bitch of a climb with driving wind and horizontal drizzle in your face.

We then crossed Cardiff Bay across the locks with a pretty sustained strong side wind, went through some very unglamorous industrial estates and headed back into town past the Millennium Centre. I recognised it as Torchwood’s HQ in the BBC series but I’m sure there are many far more cultured comments I should be able to make about it.

I went through the 10km mark in 37:28 – just short of my pre-race target of 37 minutes but I was still feeling comfortable, in particular from a mental perspective and I was able to push myself on at the hills when I’d normally probably kick back. Without a doubt, being fast and fit matters but grinding it out mentally is the hardest part.  The wind was now (mostly) behind us, which I certainly wasn’t complaining about.

The race was very well organised, which I guess you’d expect of world champs!  There seemed to be a drenched volunteer every 50m or so and one for every single of the tiniest speed bumps telling us to look out for them!

And then, the weather went mental. As we hit 15km marker, someone opened the tap and switched a giant fan on as the weather front hit in a literal (ok, fine,  figurative!) way. It utterly bucketed it down.

The sudden downpour was so bad that the BBC actually lost its live coverage for over a minute! When it returned, this screenshot doesn’t do anywhere near justice for just how bad it was! About a minute later, they were filming Kamworor breaking away when he almost lost balance because of a gust of wind! The IAAF report diplomatically put it as “But the conditions worsened in the final quarter with a strong wind and horizontal rain buffering the runners.” Quite.

It probably only lasted 5 minutes but I could barely even see through my sunglasses (which by now I felt pretty smug for having taken with me to avoid stinging eyes). I just tried to get in the slip stream of blurry people around me. I couldn’t even see clearly enough to read my pace on my watch! Annoyingly, this hit on a hill too!

The next few kilometres were a bit of a struggle – I couldn’t get under 3.55/km  which I knew meant I was quickly eating into the 30 seconds I’d banked earlier to get under target. As we started our return straight from Roath Park Lake, we reached a slight downhill which spurred me on to start speeding up with a few km to go.

As we hit 19km, my watch said 1h11. The disadvantage of the new Garmin is that it doesn’t give you the seconds on the main screen, you have to fiddle through to get the seconds. 1h11 = comfortable pace to the end. 1h12 = get your arse into gear. NOW. I was nearer the latter, although unaware of it. Thankfully, I’d started speeding up anyway.

With one kilometre to go, I really switched into sixth gear. If I crashed and burned, at least I tried.

I ended up notching my fastest kilometre of the day in 3.30min – not a bad pace considering the wind in our faces! 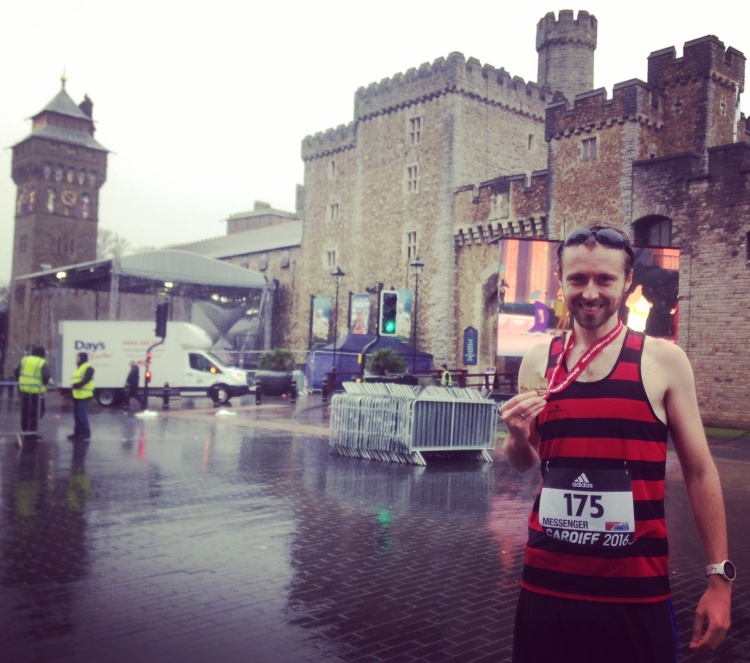 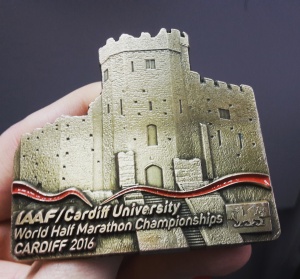 So, that’s my elusive sub-80 ticked off. What next? I’ll give it another day or two before I decide another self-imposed target to consume all of my spare time!

Although, if I’d just tried that little harder in kilome….