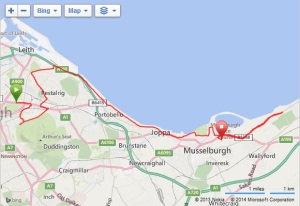 As my self-inflicted rules say that I’m not allowed to count 2 races in the same town towards the “80”, I’m annoyingly not able to tick another one off with this run. Which is a bugger because I ran really quickly this weekend! With that in mind, I’m not going to write much about it and will let Pippa, who ran her first half marathon, do the talking! 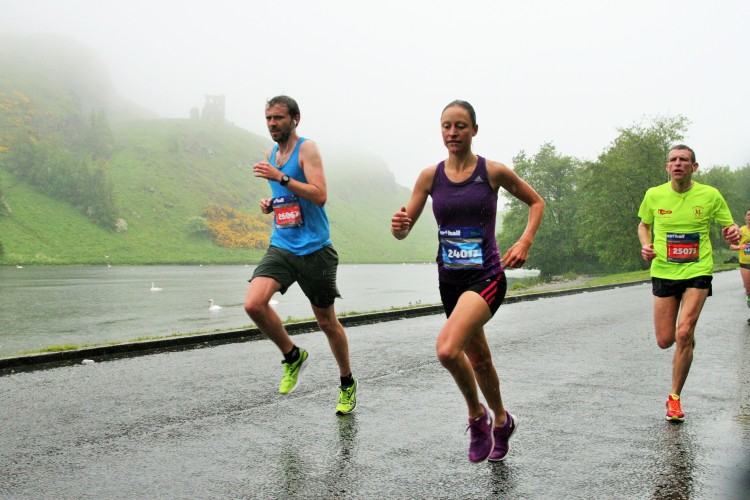 Route: Quiet, flat and…pretty boring
Organisation: Some good points (there were lots of toilets at the start, the course was well-marked, lots of water stops) but some really poor ones too (1 hour queue (!) to get on the shuttle bus home / no online tool to see other people’s results)

And the race, in Pippa’s words:

Simon made me get up very early and felt a bit of a Wally standing in the slow people’s starting pens an hour before the start time in a very sexy combination of two bin bags! Although I felt like a Wally, I was a lot of warmer (and drier) than I would’ve been without them! [Simon’s edit: you’re welcome!]

My first half marathon was getting off to a great start when the heavens opened about 15mins before the start… lovely Scottish weather…  What I didn’t realise was that the starters had to wait for the London Road start to be cleared (all the fast people) before they could set us off, so in order to warm up properly, I’d stripped my bin bags off way too early – one about 30 mins before the start (so I could actually jog without waddling) and the other 5 mins before we were supposed to start, so I ended up getting pretty chilly and wet for 15mins – d’oh!

I was initially a bit worried that I was in the wrong pen as I’m really not very fast and most of my friends that I knew were running were much further down the queue than I was. This was because Simon suggested that I put a slightly quicker time than I was intending to do so that I didn’t have to overtake people.  However, I think there’s an element of men over egging their time but women often underegging their time especially if they’ve never done that distance before so it was a complete mishmash of people of different start colours by the end of the race.  My time was remarkably accurate – only 2 mins from the prediction so I probably was actually in the right group even if everyone else wasn’t. [Simon’s edit: you’re welcome!]

I’ve been reading a lot about running long distance races (to help prepare myself properly/freak myself out) and I was a bit worried to go fast at the start (as they warn you not to set off too quickly in every article) but it was downhill so I decided that as long as I wasn’t pushing too hard it was ok to go fast at the beginning and let gravity do some of the work and maybe gain a bit of time that I would need at the end of the race to meet my target. I managed to keep going relatively fast (5:30/km) up until I hit the wind on the seafront (at Seafield/Portobello) where it’s really exposed and it was really quite miserable.

Luckily for me, I knew some of the marshals who were stationed along the seafront and it was really nice to see their smiling faces cheering everyone on and their recognition when they saw me – it really helped me to keep going and gave me a bit of extra energy too (plus I tucked into some of the Jelly Babies along the way that I had stashed in my arm pouch)!

When I got to Musselburgh, I was so ready to stop running, but there was unfortunately another 7 km to go and half of it uphill! I thought I’d get to the cross over bit just as Simon was finishing but as they started 10 minutes earlier than us it wasn’t to be and also I think he’d actually finished the race before I got to that point so wouldn’t have seen him anyway (doh for being slow). [Simon’s edit: yep, already scoffing post-race banana by then 🙂 ]

The two way section went on for ages – I kept thinking where’s the turning point, where’s the turning point, it must be soon…! It wasn’t… it just kept going and going…  However, one benefit of the two way bit was it meant I got to see a few people I knew along the way a few faster (work colleagues and a Korfball friend of Simon’s) and a few who started behind me but were roughly the same speed. It was nice to see that they were doing well too (although I’m silly and competitive so part of me wanted to catch the fast people up even though I knew there was no chance).

Once I got to the end of the two way bit, I knew it wasn’t too far to go but it was agony trying to keep myself running.  I kept telling myself just keep running (in a Dory voice from Finding Nemo).  By the time I got to the people lining the road, I managed to speed up a little (back to normal pace or Simon’s slow walking pace) and I managed to spot Simon standing on one of the barriers to get up high.  I was waving to him but he didn’t see me for ages, although luckily he still managed to get a good photo (yay!)!

I managed to “sprint” across the line and was ecstatic to finish! Finishing thoughts were thank god that’s over – why did I sign up for another one in two weeks’ time? I must be mad.  I hurt a lot.  Can I sit down now please? No… oh I have to go through a get my medal (that could be used as a weapon) and water – oooh blessed water that isn’t slopping out of the bottle as I run!  The lovely EMF website has a funny video of everyone crossing the finish line, I literally get to the finish line sprinting and stop and start walking like a robot, knowing that I need to get out of other people’s way!

I’m glad I did it and feel like it’s a real achievement but OMG it was hard! Ice bath, bacon, physio, recovery and stretching and I’ll be ready for the next race that Simon has encouraged me to sign up for…in a week’s time and the week after that Helsinki Half Marathon…eek! [Simon’s edit: I feel like I’m coming across badly now!]