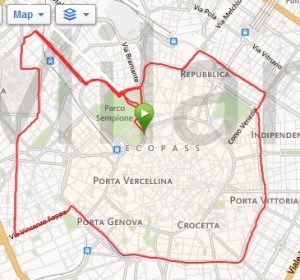 I had only been back in Europe for under a week – and was still very much suffering from South East Asian pollution and coughing up egg yolks at a worrying frequency (lovely, I know), that I was off to Milan for my next race.

After a slight hiccup at the registration when I picked up my bib (I might not have fully read the instructions) and a small byebye to my precious euros, I was all set to go!

On the morning of the race, Pippa took part in the ‘Race of the 50,000’ Stramilana 10km run which, as the name suggests, is a somewhat chaotic decent of a herd of slightly pushy young Italian men, excited children, hobbling oldies and … dogs across town. She lived, scratch-free. Not sure the same can be said of everyone else.

My race started an hour after hers finished and kicked off at the Sforzesco Castle along Piazza Castello. The castle is very impressive although its splendour goes a little when you know it was pretty much all rebuilt in the 19th Century. 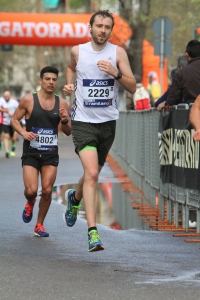 As I had slightly exaggerated my target time, I was in the fastest start group, only a meter behind the elite athletes when the gun went off. Oops. Let’s just say that that didn’t last too long …

The race itself is fairly straightforward and not overly exciting in that it basically loops all around the city centre along some very straight roads. It’s great for speed as it’s very flat (various world records have been set there) but not exactly very scenic as we were mainly running through residential areas and ex industrial town. The weather was odd: blue sky and rain at the same time.

Despite the struggling lungs, I surprised myself and kept at just under 4min/km for the whole race, other than a 5km stretch when the wind was bang in your face. I went through the 10km split in 39m50 which was, technically, my race PB! Annoyingly, the slower stretch meant that my overall average time was of 4.00.06min/km! D’oh. I’ll have to break the 4 minute barrier at the next race…

After puffing past the Arco della Pace, you finish the race by circling the Sempione Park and cross the line inside the Arena Civica stadium. My time was good, a PB actually, but the standard seemed very high as I was ‘only’ 281st, with an army of Italians ahead of me. However, silver linings and all that, I was the first British finisher – ha! (ok, the second one was 2,200th … and he may have been the only other one)

(it was weird)
Injuries: None, although I really should learn to stretch properly after races